I’ve played with a lot of windows phones over the last few years. I started writing apps on Windows Phone 7 and the platform has matured nicely.

Windows phone deals were plentiful this holiday season. The Microsoft store was giving away Nokia Lumias as door busters (1020s on one day and 1520s another), which would have been easy to snag for those privy since the Microsoft Store here in Orlando doesn’t get much attention. The less fancy Nokia 520 has been on sale for cheap as a go phone for those who prefer pay-as-you-go plans.  I’m in awe of the fact that you can buy a mini computer for $50 or less, so I bought a Nokia 520 AT&T Go Phone from BestBuy.com. 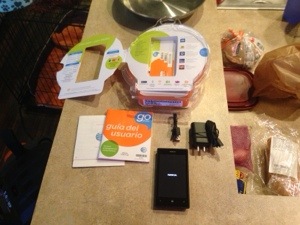 My iPhone 5 is a much better phone, so I will continue to use it as my primary. But, this Windows Phone will be a solid backup that I can use as a camera, music player, development phone, and doing internet related stuff when wifi is available to save on battery. It’s a cheap way to get access to all of the features a windows phone makes available that iPhones don’t have: Live Tiles for at-a-glance updates and deep integration with social networks,

When the phone arrived, the first thing I tried was to pop my SIM card into the phone to make some calls and I realized that the nano-SIM card from my iPhone was too small for the micro-SIM slot. When I checked into it, I found some adapters were available for just this problem. 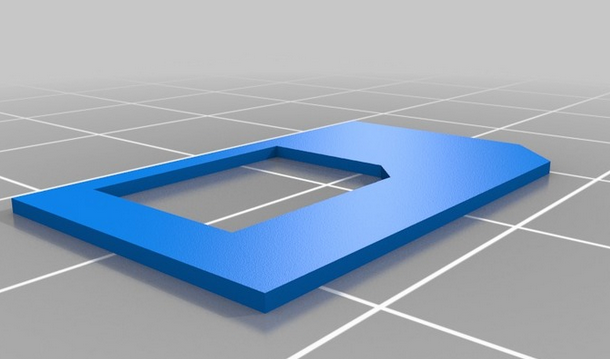 An adapter is so cheap that its a joke, but I didn’t want to pay for shipping and wait for it to arrive. A small plastic piece like this is just the type of thing a 3D printer is perfect for, and they happen to have one down the street at the Microsoft store. I rolled into the Microsoft store just as it opened, and asked if I could print off this adapter so that I could make calls with my phone, and they were happy to oblige. They interrupted the printing of a chess set, which had been 13 hours in the making! I felt kinda bad about that, but I was happy to be able to make calls from my phone! 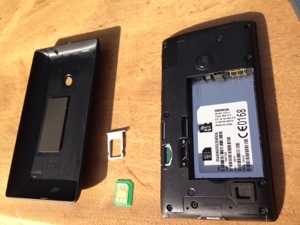 Having a limited app store has been one of Microsoft’s biggest criticisms, but I found all the apps that I use regularly: Netflix, Twitter, Mint, Instagram, Facebook, Reddit, and Google Maps. Phonely is a pretty sweet RSS client for Feedly, and the PlayTo app that works like AirPlay. I’ve heard raving reviews about the HERE Transit app, though I won’t have occasion to use it any time soon. It has been fun playing with windows phone apps, though I am now excited for twelve days of iPhone apps.